History of the JFK 50 Mile Challenge

The JFK 50 Mile was first held in the spring of 1963. It was one of numerous such 50 mile events held around the 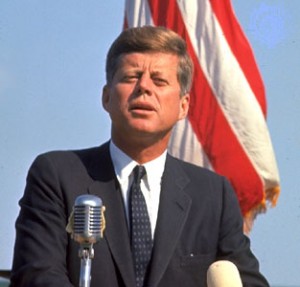 country as part of President John F. Kennedy’s push to bring the  country back to physical fitness.

In 1963, the initial inspiration behind the event came from then President John F. Kennedy challenging his military officers to meet the requirements that Teddy Roosevelt had set for his own military officers at the dawn of the 20th Century. That Roosevelt requirement was for all military officers to be able to cover 50 miles on foot in 20 hours to maintain their commissions. When word got out about the “Kennedy Challenge”, non-commissioned  military personnel also wanted to take the test themselves as did certain robust members of the civilian population.

The Marine challenge was actually taken up quickly by civilians, including the White House staff. As JFK had thrown down the gauntlet, his brother, Attorney General Robert F. “Bobby” Kennedy decided not to wait for the military test results and he and four aides immediately took up the challenge the very next Saturday, February 9th. RFK said to his last surviving aide before he dropped out at mile 35, “You’re lucky your brother isn’t president of the United State.” Bobby hiked 50 miles along the C&O Canal towpath from Great Falls, Virginia to Harpers Ferry, MD in 17 hours and 50 minutes in freezing weather, through snow and slush, without any preparation at all and in a pair of leather oxford dress shoes!

In the city of Sittard, in the Netherlands, the walk was done in April 1963 and every year after except in 2001 when it was cancelled due to the outbreak of Foot & Mouth Disease.