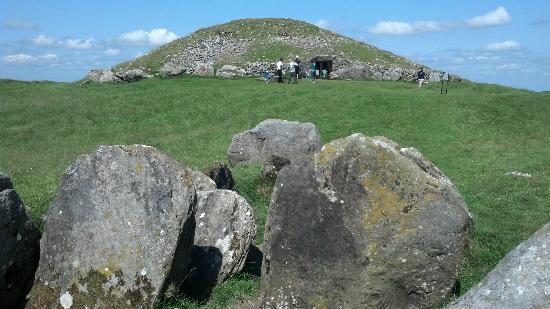 The Loughcrew cairns lie on a ridge which consist of four hills three of them are called Sliabh na Cailli the fourth called Patrickstown. There are 32 cairns recorded although about 25 are all that can be easily noticed today. A cairn is a mound of stones, underneath these cairns are passage tombs. In most of these tombs remains of cremated human bodies were found and this common with most passage tombs, the cairns vary in size from about 7 meters to 50 meters in diameter. They are all named after letters of the alphabet, cairn A being the most westerly to X and Y on the eastern hill of Patrickstown.
Cairn D is the largest although there was no tomb discovered in it, cairn T and L are the most spectacular, the inside of each are decorated with inscribed art in the stones. There are small amounts of art in most of the other tombs .These stone monuments date from Neolithic times and are about 5,000 years old. The Neolithic people were organised farmers and grew crops of wheat, oats and barley, they also had livestock.
Two of the peaks are called Cairnbawn east and Cairnbawn west which means white cairn, this is because they were once covered with white quartz which is believed to have come from Wicklow Mountains. The passage of it was most likely up the Irish Sea and then proceeded up the river Boyne and Blackwater.