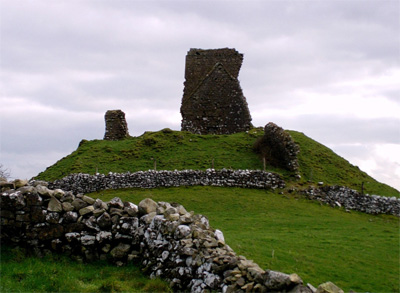 The low ridge at Moylagh contains many of layers of history, possible from Neolithic times to the present day. It wasmost likely that there was some farming activity during Neolithic times due to its proximity to the great cairns at Loughcrew.
The oldest archaeological evidence is a substantial ring fort as it has many defensive banks, it most likely was the fortified home of some leader of the time, forts usually date from early Christian times. There are strong suggestions that Moylagh was a monastic site, some evidence of this is that there are many circular ditches around the site. The Anglo- Normans arrived in the 1170s and   built a motte and bailey, they usually occupied existing important settlements. On top of this motte a wooden castle was built and this may have lasted until the sixteenth century when a stone castle replaced it. The main family that lived in the castle from 1289- 1660s were the Barnwalls, a child of this family was drowned in a bath tub.
The most prominent feature on the site is the tower house, built in 1470, often described as the Moylagh Castle although the monument on the motte is the real castle. There was an old church attached to this building and the footings can still be seen, it was in existence until about 1680. There was another church later in the field north of this in the late 1700s. 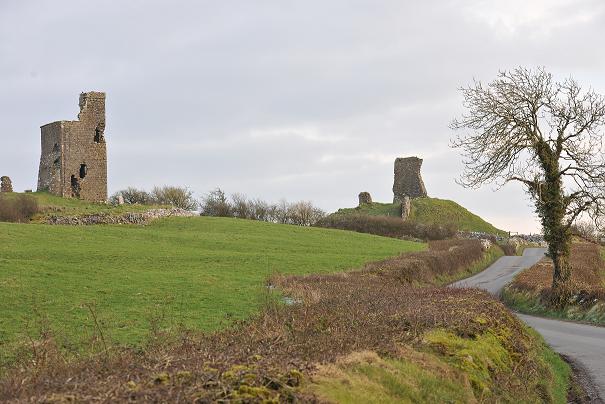 Around the remains of tower and church there is a grave yard used up till the 1960s.A famous huntsman Brian McCormick [Brianbawn] is believed to be buried there in a standing position so that he could see the hunt on Grennan hill. Victims of the great famine were buried there from the Oldcastle workhouse. In 2012 there was a monument erected to commemorate this event by Moylagh Historical Society and they also produced a booklet on the history of this interesting hill.